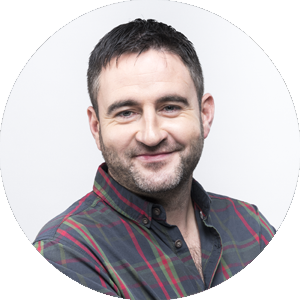 Mack is down to earth, friendly and personable. He has a mischievous sense of fun and enjoys the craic with his friends. He appears confident and can easily make people feel at ease. That said he often puts his foot in it too!

He usually doesn’t have much luck in affairs of the heart and although he’s very much in love with Dee he can make a total mess of things with her too. One night when he was drunk, having been fighting with Dee, he jumped into bed with her sister Katy. If that wasn’t bad enough, Katy found herself pregnant a while after this and there was uncertainty as to who the baby’s father was. Dee stayed with her husband, she forgave him and they decided to move forward. But in a small town like Ros na Rún that is easier said than done.

Mack drives a hackney and he owns the local service – Luas na Rún. He has shares in the Café also. He’s kept very busy between the two places but he always has time for his friends and especially for his niece Mo. He is like a big brother to her, giving her advice and taking her out running when she suffering from depression after Anto’s attack on her.